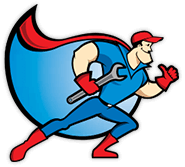 What to Do When a Pipe Bursts

Plumbing emergencies never happen at a convenient time. Cold weather, old pipes, or drastic changes in water pressure can all cause your pipes to break, sending a dangerous amount of water throughout your home.

When a pipe bursts, it’s important to act quickly. Water damage can be just as costly—if not more expensive—than replacing the pipe itself.

But, what does a burst pipe really mean? When water breaks through either joint or the walls of a pipe, it is considered to have “burst.” This typically occurs when a weak spot in a pipe is paired with extreme pressure.

It can happen deep within your walls or under your sink, but in any case, it’s important to know how to handle a burst pipe the moment it happens.

Before you investigate the cause of the break, you’ll need to redirect and stop the flow of water coming out of the pipe. It will not simply run out of pressure on its own fast enough to not cause significant damage. Follow this guide the moment you detect a burst or leaking pipe.

The main water line shut-off valve is typically located in one of three places depending on the region and architecture of your home:

If you live in a colder climate and have a home with a basement or crawlspace, check this spot first. The shut-off valve is typically connected to the pipe with your water meter. Turn the handle to the horizontal position to turn the water off for your whole home.

A valve outside works similarly than ones indoors but is more common in warm regions where frozen pipes are not as large a threat. Turn the handle horizontally, or if there is a round knob, turn clockwise to shut off the water.

Street-level water shut-offs are a bit trickier because some towns do not permit homeowners to handle them. If you are given access to the street-level water, turn the water valve closest to your home that closes off flow to your pipes.

A Note on Cold-Water Valves

Some appliances and plumbing fixtures will also include smaller cold-water shut-off valves in the event of a leaking sink or shower. This is a temporary fix if the water is secluded to that area, but it’s important to turn off the water to the whole home before making any repairs and to relieve pressure from the pipes.

Once you’ve turned off the flow of water to your home, it’s important to remove some water pressure still in your pipes. Gently turn on your sinks to relieve the pressure and send the water into your fixtures instead of the open pipe.

Start with the cold water to simply drain the pipes and to avoid activating the water in your water heater. You can then temporarily turn off the hot water in your home before emptying the hot-water pipes.

If you’re concerned that an abundance of water is moving through your walls or enough has leaked to coat your floors, it is often safest to temporarily shut the electricity off to that part of your home.

To do this, toggle your circuit breaker switches to either isolate that area of your home or the main switch to shut it all down at once. Be sure to speak with a professional before flipping the electricity back on.

Once the flow of water has been stopped and contained, contact an ARS/Rescue Rooter specialist for immediate assistance with your burst pipe. The team can both walk you through steps on your own and help you control the flow of water as they are on their way.

Fixing and Cleaning Up a Burst Pipe

In most cases, it isn’t ideal to tackle a severely burst pipe on your own without professional help. If the pipe burst because of corrosion or water pressure issues, chances are that it will happen again, so it’s important to get an expert eye on the case.

Still, it’s helpful to know what to expect when a professional plumber does come to your home. In the simplest scenario, the burst pipe was a one-time fluke where the pipe was poorly installed or simply corroded over time. In others, it may have stemmed from a larger issue.

When a professional does come to your home, they may:

As your plumber gets to the bottom of your burst pipe, take immediate action to dry out the area affected by the leak. Even clean water can lead to mold growth and attract pests into your home.

Remove the water with buckets and a mop as quickly as possible, taking extra care to clean the area after the water is removed. If the leak occurred in the basement, your sump pump should kick into gear to lend a hand.

Ensure that there is proper airflow in your home as the water dries and when possible, switch on a dehumidifier to discourage mold growth.

If the water occurred inside your walls, speak with your ARS/Rescue Rooter team about investigating further unseen damage during the leak. Smart home technology can even detect water leaks and burst pipes the moment they occur, so ask about available upgrades to keep this from happening in the future.

If the water damage is covered by your home insurance policy, be sure to take photos of the process from start to finish. This includes any water and mold damage that has directly occurred as a result of the burst pipe.

What Causes a Pipe to Burst?

As we mentioned above, a burst pipe occurs where there is too much pressure on a weak part of your pipes. But how do your pipes become weakened in the first place? There are four main offenders to pipe health.

Ice can do a real number on the health of your pipes, even newer installations. When water moves freely through your pipes, its joints and walls have no problem handling the pressure of the water.

The second that water starts to freeze, however, the water expands. If the water is sitting waiting in your pipes to come out of the faucet, it fluctuates in one concentrated area, pushing through the pipes and causing it to burst.

How to Prevent Frozen Pipes

The most obvious fix to protecting against burst frozen pipes is by keeping your home as warm as possible. However, in the event of a power outage, pipes that sit outside your home, or holiday homes left for the season, problems can creep up on you.

Here are some things you can do to prevent your pipes from filling with ice:

While extreme water pressure may seem ideal in the sink and shower, excessive pressure can cause damage to your pipes. This is particularly true if your water pressure frequently fluctuates.

How to Prevent Water Pressure Problems

The best way to get ahead of pressure issues that can lead to burst pipes is early detection. Does water frequently sputter from your pipes? Does the water pressure change drastically in the shower?

If water pressure is consistently too high, installing a valve is a simple fix.

Do your pipes bang against the walls when you switch your water on and off? The influx of pressure can cause some pipes to jump, sending them banging against one another or anything else nearby.

This constant shaking and impact can lead to small breaks or weak spots in the pipe’s joints or pipe wall.

How to Prevent Water Hammer

Your ARS/Rescue Rooter team can install a few simple fixes to stop water hammer from damaging your pipes. These include adding:

Older pipes naturally break down over time, but highly acidic water or water with certain damaging properties can cause pipes to rust and corrode more quickly. Hard water, for example, can break down the galvanized coating of your pipes at a greater speed.

While this process still takes many years to cause breakage, weak pipes paired with one of the issues listed above could be a recipe for disaster. It is important to have your pipes inspected every two years or so to ensure that corrosion has not begun in any area of your home.

How to Prevent Pipe Corrosion

In addition to frequent pipe inspections, pipe corrosion can also be kept at bay by regularly testing the quality of your water. You can purchase an at-home water test that measures its hardness, pH levels, and amounts of less-common issues like bacteria and sediments.

Corrosion can also occur when the pipes are installed throughout your home using dissimilar metals. For example, combining copper and stainless steel pipes leads to a chemical reaction called galvanic corrosion, causing your system to break down.

You should be able to depend on your local plumber for more than simple one-time fixes. The local team at ARS/Rescue Rooter takes great pride in their work, extending their wide knowledge of home fixtures to even the smallest repairs.

Call ARS/Rescue Rooter for emergency repairs, especially if you detect a pipe has burst in your home. In addition to stopping the leak and repairing the pipe, the team will help you determine if you have a larger issue with your pipe.

By taking an integrative approach to your home’s plumbing repairs, homeowners can save thousands of dollars on future problems. Not only will an ARS specialist repair the pipe quickly, but they can also provide peace of mind that your home is safer and more secure from plumbing issues in the future.